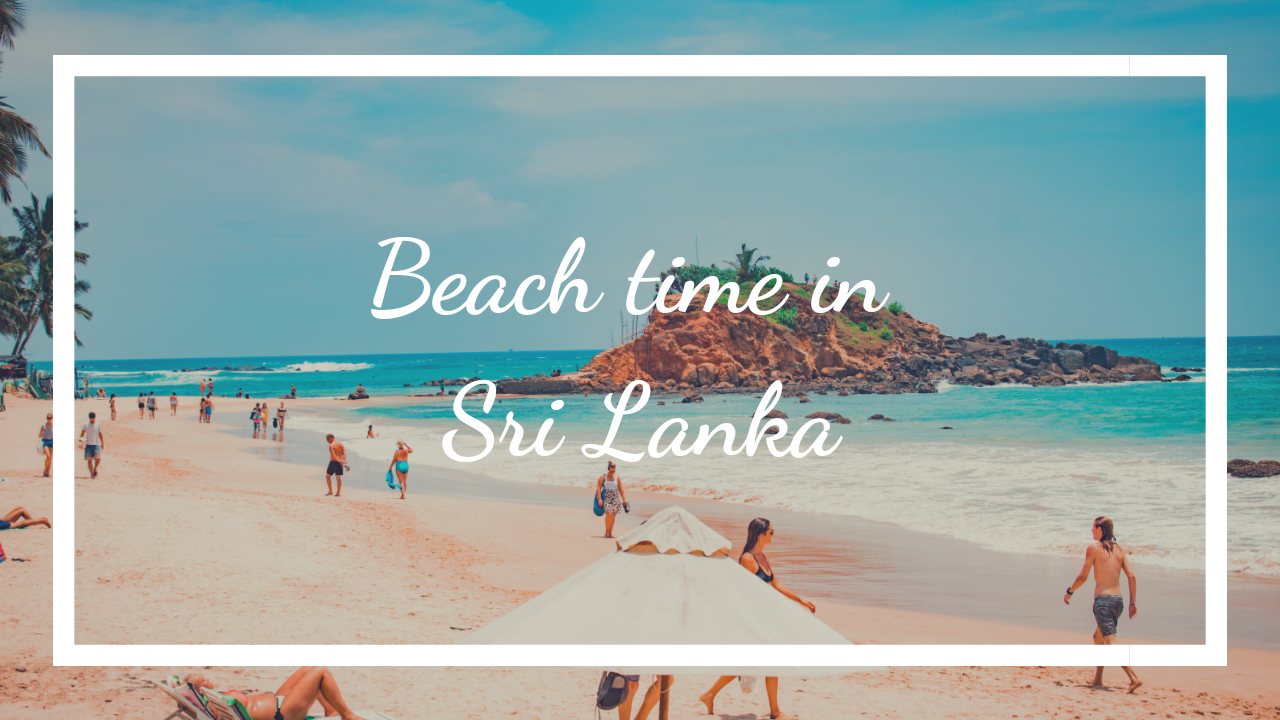 Maarten had his fun in the mountains and the Jungle, so now it was my turn.
It was finally beach time for us.

Welcome to the South coast of Sri Lanka

I know it’s a classic route going back to Negombo but anyways, plenty of beaches to choose from. 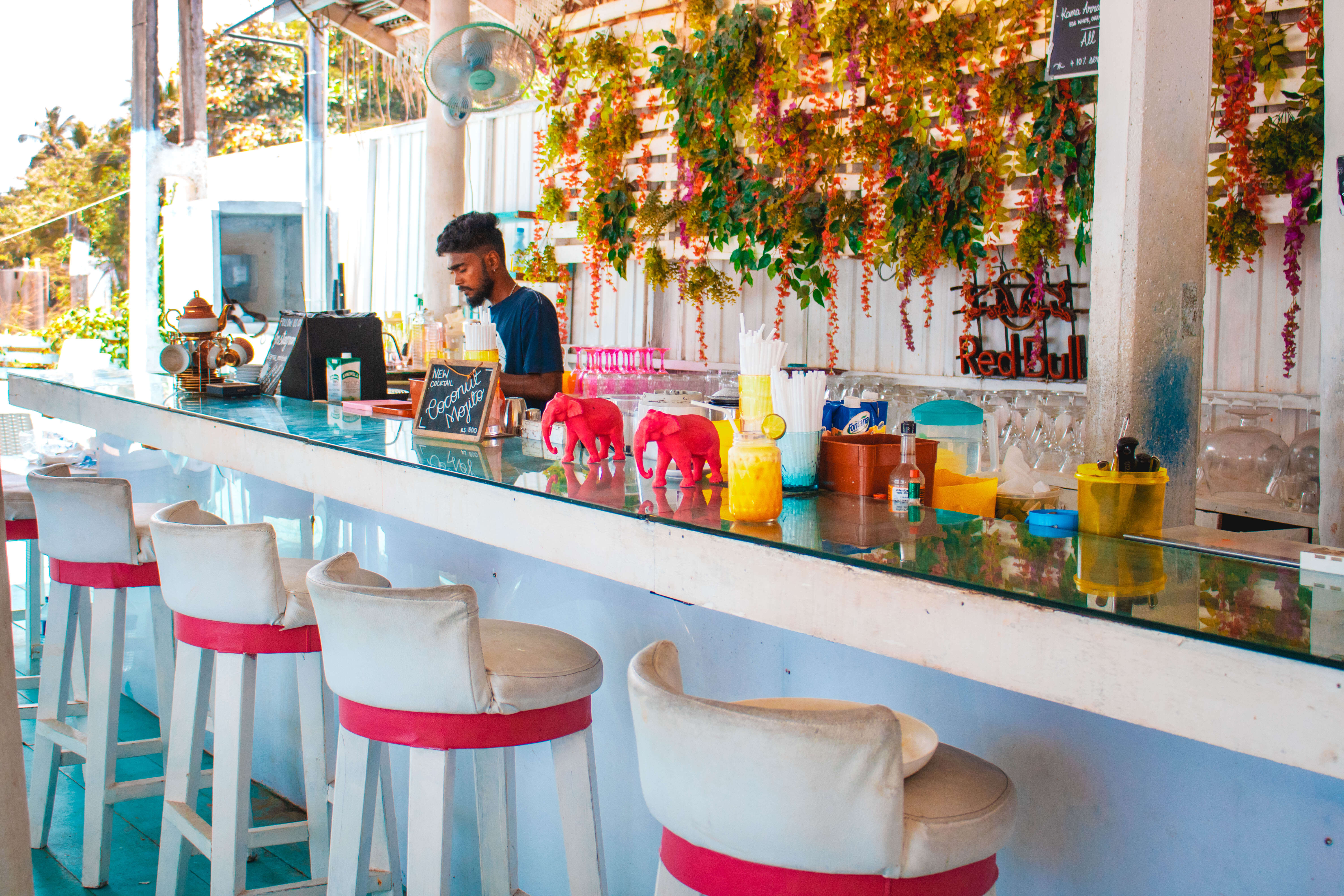 I picked out the following beaches

Mirissa was a last min call, we did this instead of Yala National park.
I also chose this beach because there is an epic place nearby that is so beautiful.
Yes, it’s that Instagram spot with the palm trees and beach view. 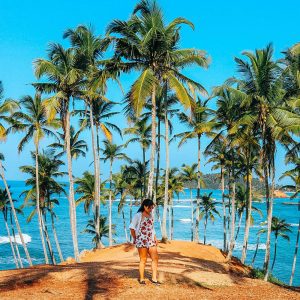 I even think Mirissa is the most outgoing beach area from the south.
Couple of fun bars and beach restaurants.
You can say that it’s a bit touristic, but still not too crowed though.
A lovely beach to relax and chill. 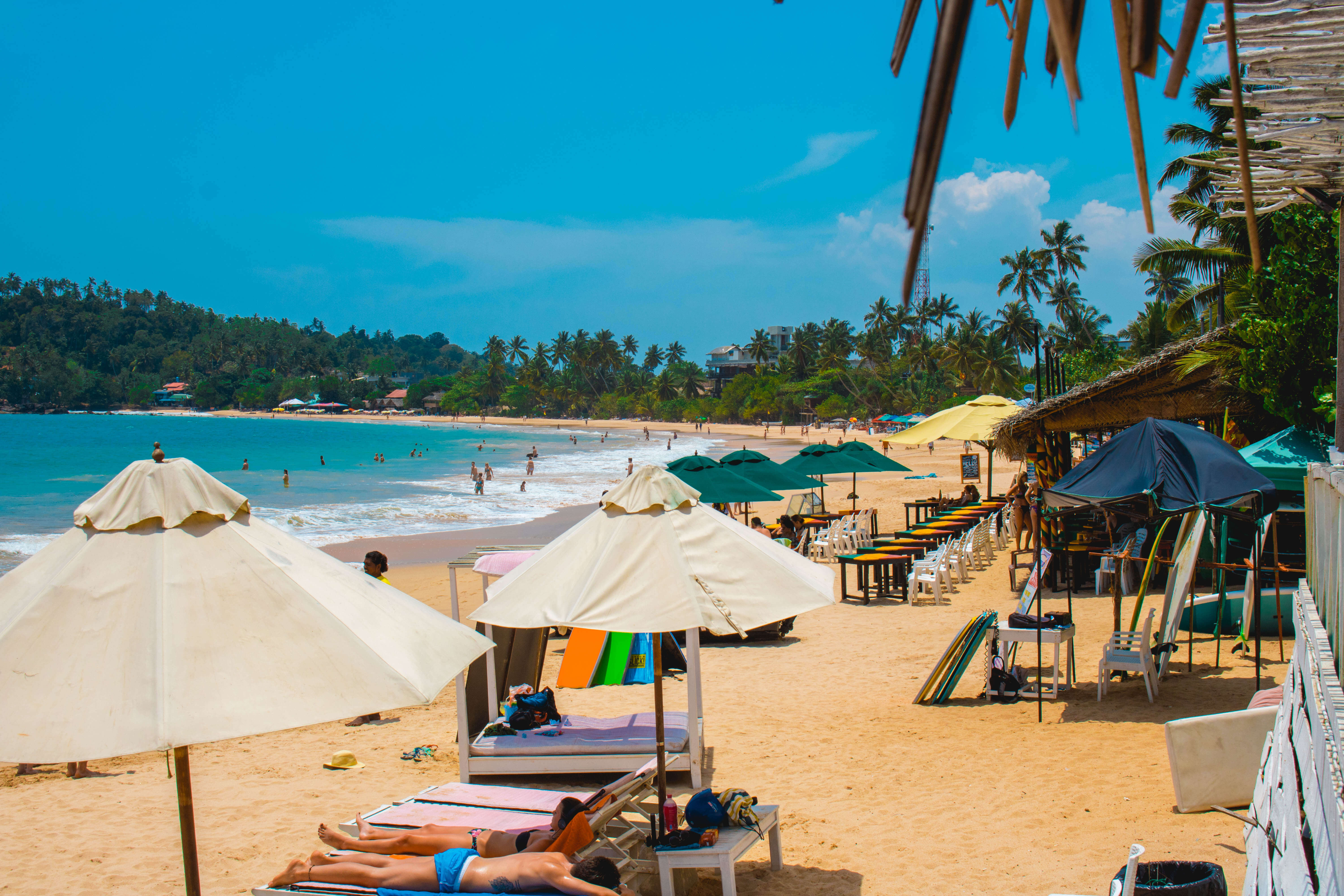 Somewhere between Mirissa and Bentota we stopped at a place where they had a swing.
Which I thought was unique in Sri Lanka and it was only at 1 or 2 spots (God knows why I thought that).
But I couldn’t take that epic shot because.

You know those typical fishermen pictures you always see when you look up Sri Lanka.
We saw them on the road and I wanted to stop and observe how they fish.
Well, they were waiting for people like us to show us how to do it BUT only if you pay for it, I thought I was going to cry and laugh on the ground.
But they were serious, no photo or watching them if you didn’t pay them.
I stood there a bit angry and annoyed but any ways I have the photo. 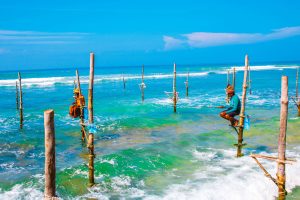 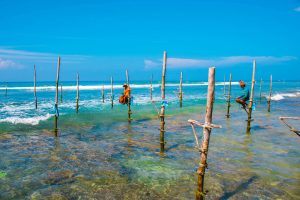 Now Bentota beach was per chance due that our next accommodation is right behind it.

But before we checked-in in Bentota we went snorkelling on a beach nearby.

There was a small island nearby where there is a ‘ship wreck’.
Our guide asked us if we already went snorkelling, we said yes.
Then he said c’mon and follow me! We swam and swam further away from the boat and I started to get worried.
I already went snorkelling, yes, but it was never too far from the boat and the ladder was already put out.
He assumed we were pro swimmers and have a good physique.
And than we didn’t see him anymore and swam back, totally out of breath and no ladder was put out.
Good thing that Maarten is in good shape and he pulled himself up and throw out the ladder for me.
After 10 min he showed up and asked us where we went?
Dude c’mon keep an eye on your customers.. 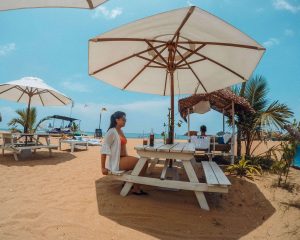 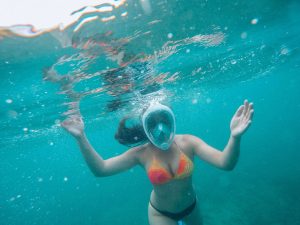 Going to our accommodation in Bentota we were warned for ‘beach boys’ or in other words small drug dealers.
Okay honestly, we had a guard watching the beach and every time some weird guys were around he would ask them to leave, so I guess we were Lucky. 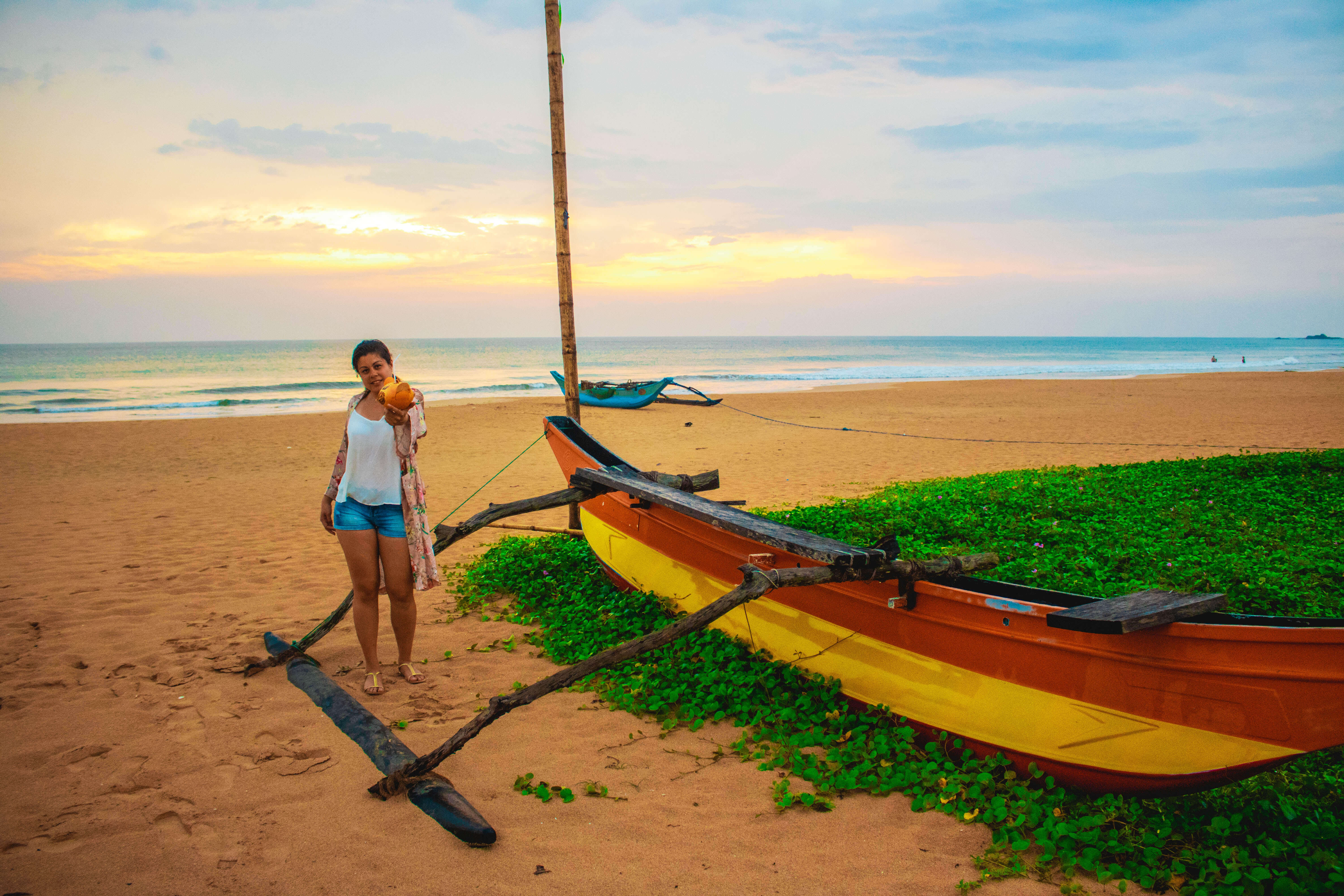 What a beautiful quiet beach!
It was so calm and clean with an epic sunset view!
What else is cool around Bentota is that behind the beach and a bit of green is the coastal line train track.
The coastal line begins at Maradana station and goes whole the way up to the Colombo fort.
But don’t worry, the train doesn’t go that fast and most of the time there is guy looking out for the people’s safety to cross over easily. 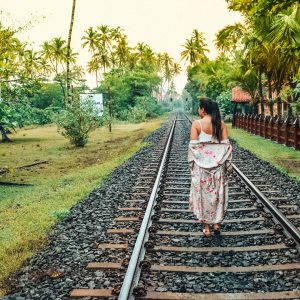 I put these together because they are right next to each other.
But they’re both so different!
So wadduwa and waskaduwa is only a 40min drive from Bentota.

So going to Wadduwa we stopped at a turtle station.
A place where they look after turtles.
Apparently there was a float not too long ago and washed most turtles sanctuaries.
Most sanctuaries had to start all over again but had no money to cover the expenses.
But there were people who donated or even adopted turtles to give them a chance again in life. 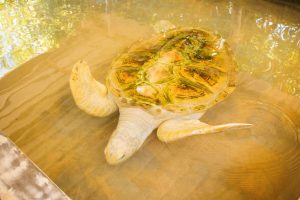 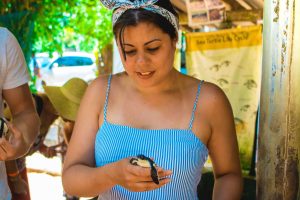 You can even volunteer to help protect the eggs or collect them (depending of the situation at the moment) and afterwards release them back in the see.
But some can even grow old here, that sadly happens sometimes due injury. 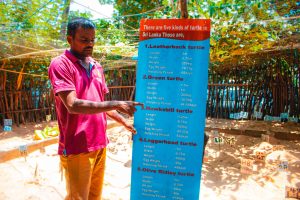 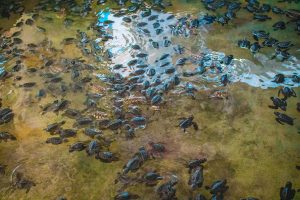 Arriving at our new accommodation we immediately wanted to explore the beach.
Well that took us 5min and we were back at the pool.
That beach was so freaking dirty!
Plastic, glass and even needles.
Nobody is cleaning it up, nor the hotels or even the fishermen.
That breaks my heart, it could be such an amazing beach full of life.
But now I know you have to watch your step and actually you don’t feel safe. 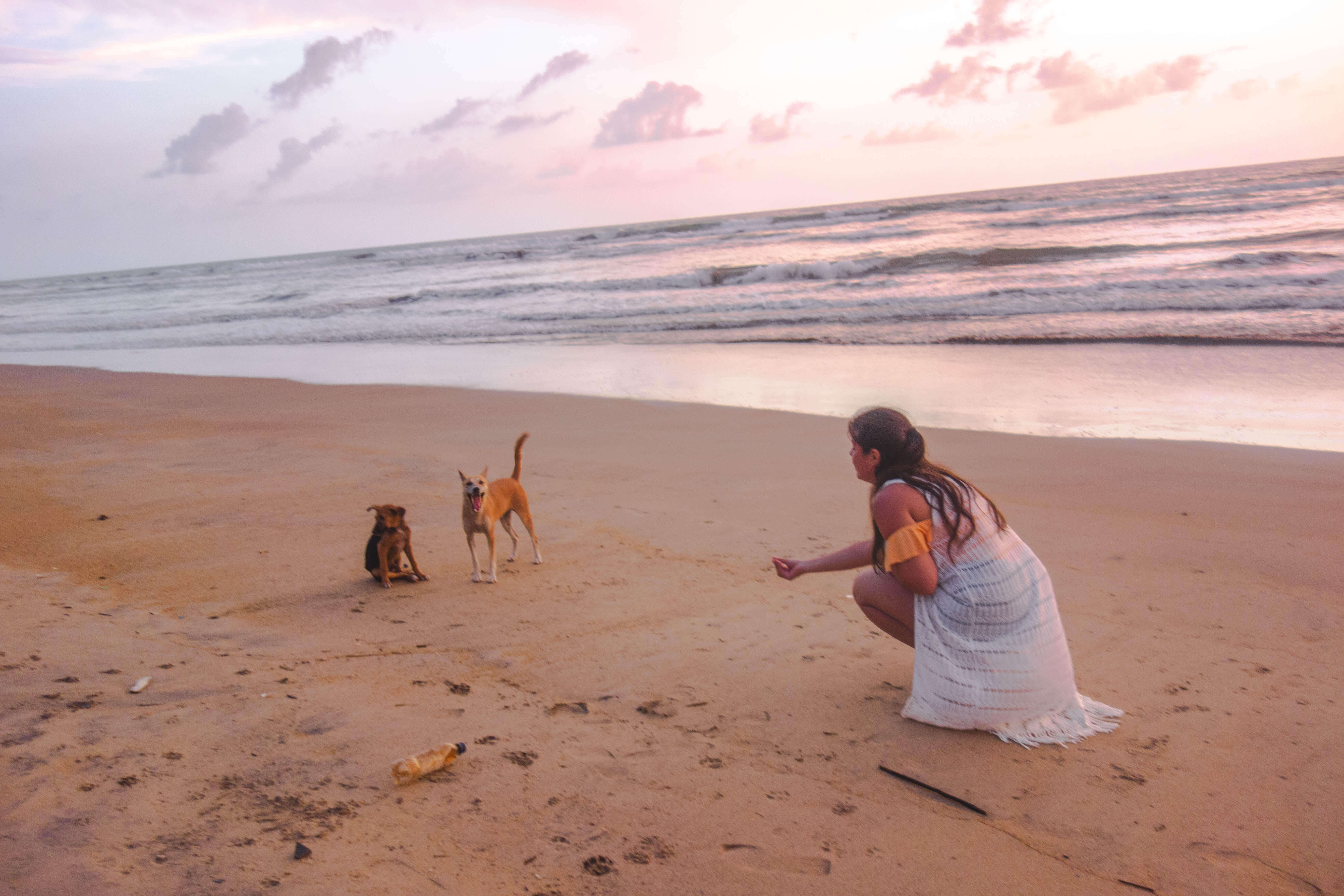 But, our accommodation was so bad that we kind of had to flee to another beach to have a good time.
We took the car and drove to the next beach, Waskaduwa.
It was a private beach from a hotel but sooo much cleaner.
If we only knew that sooner. Oh well, we all can’t be Lucky all the time.

Now Galle is at the coast but is not a beach.
Galle is a beautiful old Dutch Unesco village at the coast, and it’s about a 1,30h (average of 70Km/H ) drive from Colombo.
It’s best to discover Galle by foot, you’ll find Churches, Mosques and Dutch colonial buildings.
The village exists out of cute little Streets with the accompanying cafes and restaurants. 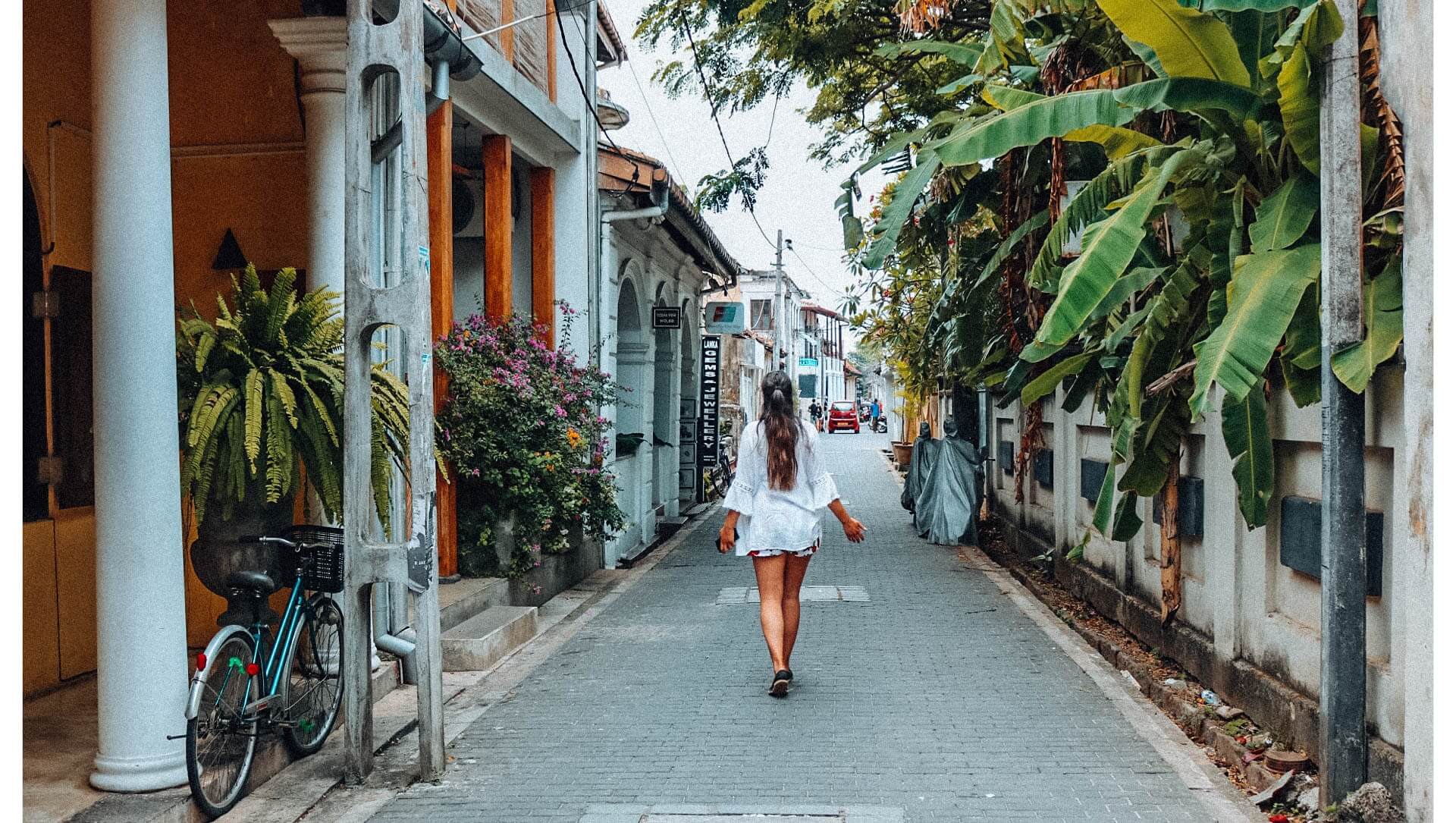 The must see in Galle for me are: The old city walls from the fort.
On the south side is Flag rock and is THE hot spot to watch a sunset.
And you should check out the snake charmers, pretty awesome.
It’s just like in a movie, as the flute starts the cobra’s starting to get ‘hypnotized’.
I couldn’t take a picture though or they immediately stop and ask for money first. 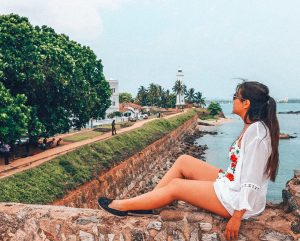 We ended our trip in Colombo.

Colombo is the capital and largest city of Sri Lanka.
It’s a Multi-cultural city with, among others Sinhalese, Tamils, Sri Lankan moors and even Malaysians. 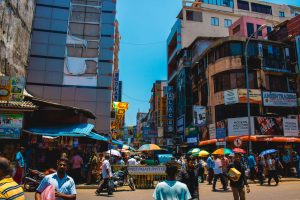 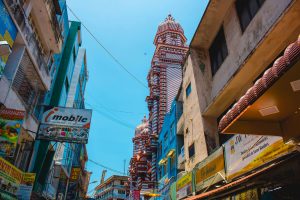 Various religions are also represented like, Buddhism, Hindu Christianity and Islam.
But that also means you can visit amazing highlights like: the Red Mosque or Jami Ul-Alfar Mosque which is right in the middle of Pettah, Colombo’s commercial district. 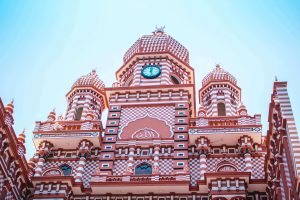 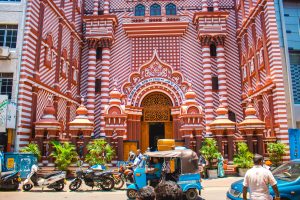 Or the Simamalake Shrine that is on a small Island on Beira lake, you can recognize it by the green coloured water due to the pollution.
(Fun fact, the Shrine was built from donations) 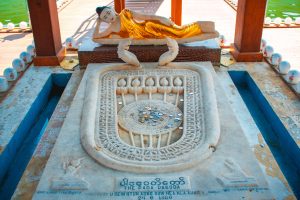 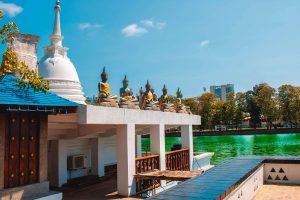 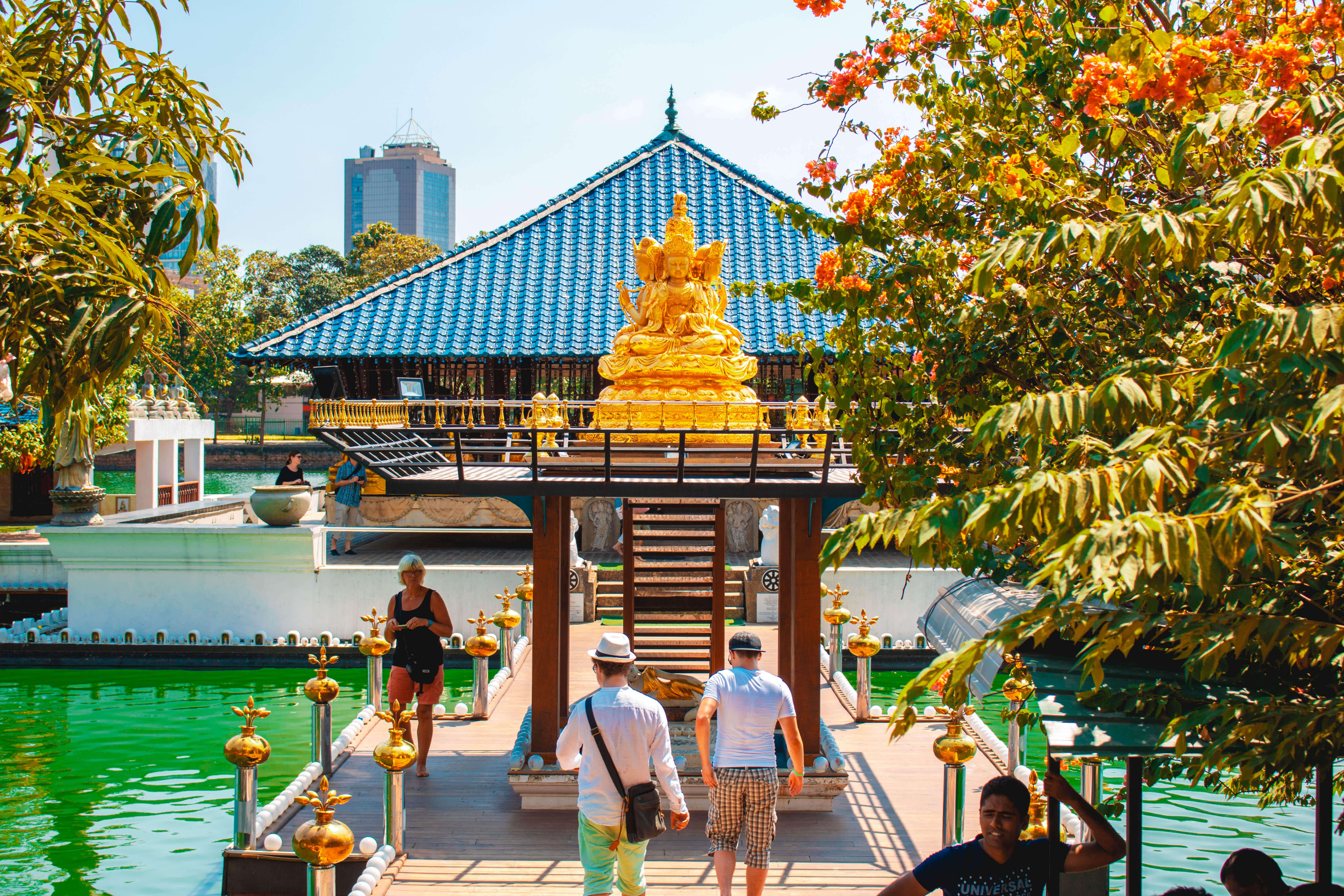 And 1 street further is the Gangaramaya Temple also an important temple in Colombo that still attracts a lot of locals but also tourists.

Make sure you start doing your highlights on time because traffic in Colombo is the worst!
Keep an eye for you stuff as it’s so crowded and people are watching you!

Sri Lanka was an Eye opener for us.
There are so many various culture mixes and religions, but somehow it works.
There is respect for animals and for nature and we could learn a thing or 2 from them. 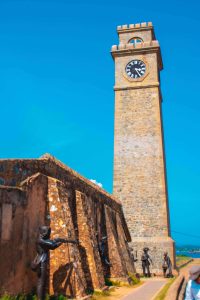 I’m glad we did Sri Lanka now, because I got a feeling that Sri Lanka is seriously growing in Tourism.
Not that it’s bad thing because I really recommend visiting Sri Lanka!
I just hope they can keep up the respect for nature and each other.

One thought on “Travel: Fun beach times along the southern coastline of Sri Lanka”