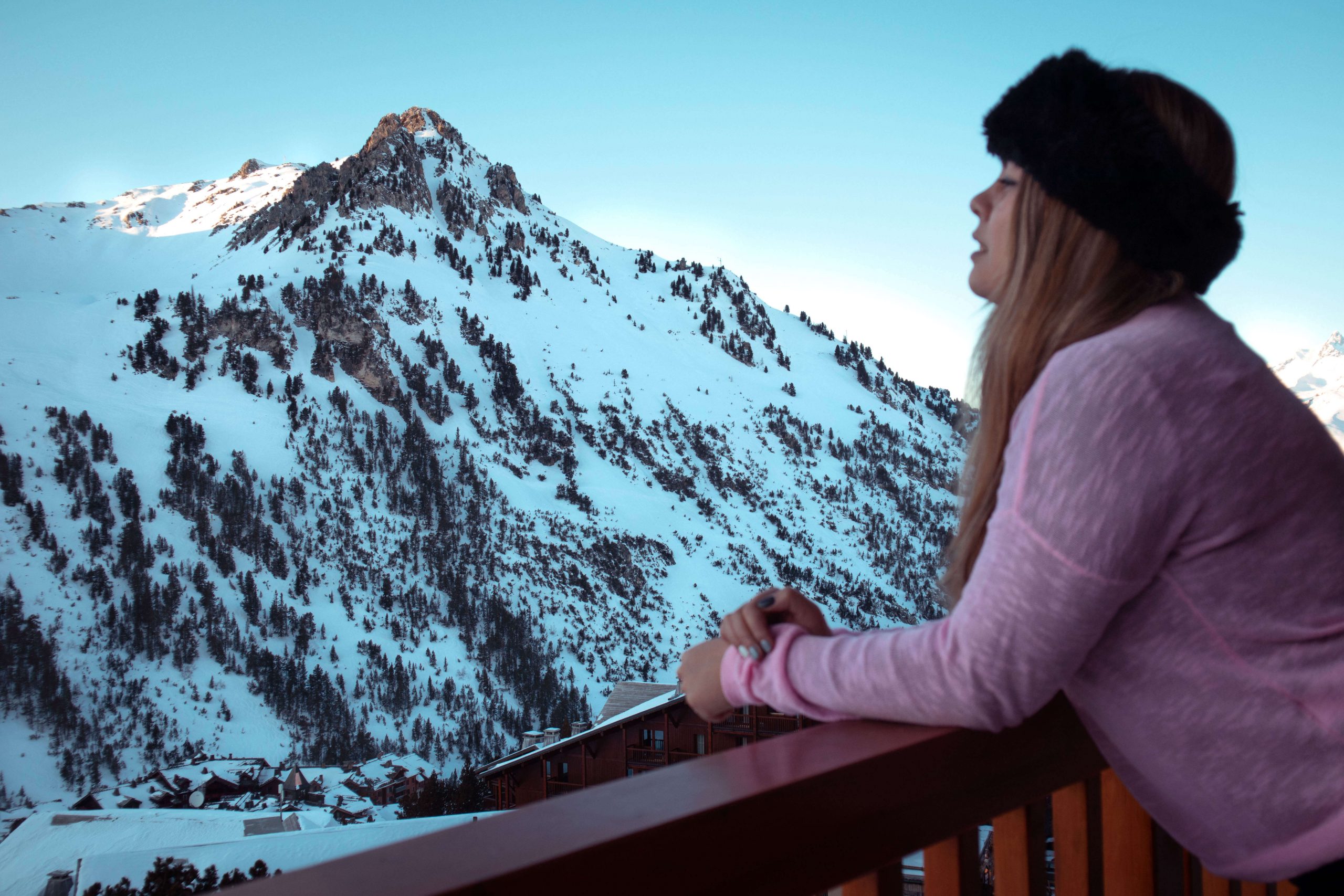 Recently a colleague and I went on a ski trip together to Les Arcs.
The Thalys Snow offers a direct train to many popular French ski resorts. Making it easy for people in Belgium to escape the hustle and bustle of the city to breathe in the clean mountain air while on holiday. 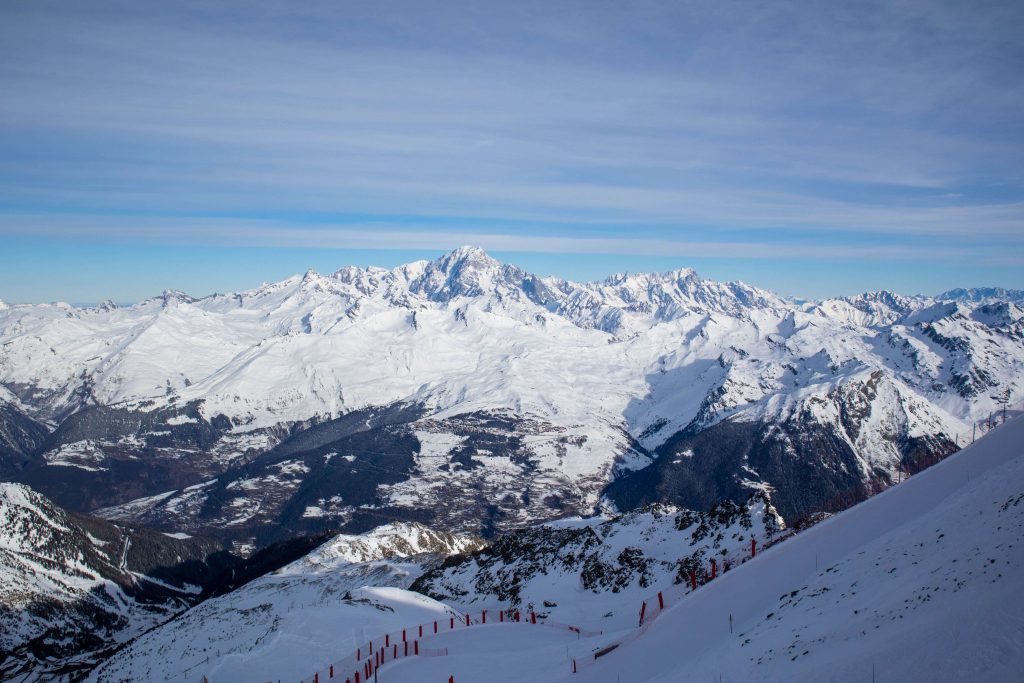 Les ArcLes Arc is a great ski destination for mixed skiing abilities. They have plenty of beginner’s courses, intermediate, advanced, and steep black runs as well.
All 4 ski resorts that make up Les Arcs are ski in and ski out (though not all of the hotels are) and they are linked via ski runs to La Plagne to create the larger area of Paradiski.
The Paradiski area has 425km of pistes in total. And uses artificial snow to guarantee visitors good snowfall between December and April every year. The artificial snow doesn’t replace the real snow though. It is laid either to give the real snow a good base, or to top up the amount of snow on days when the snowfall has been quite light. They use snow melt or surplus drinking water to make the snow so there are no chemicals going into the environment. 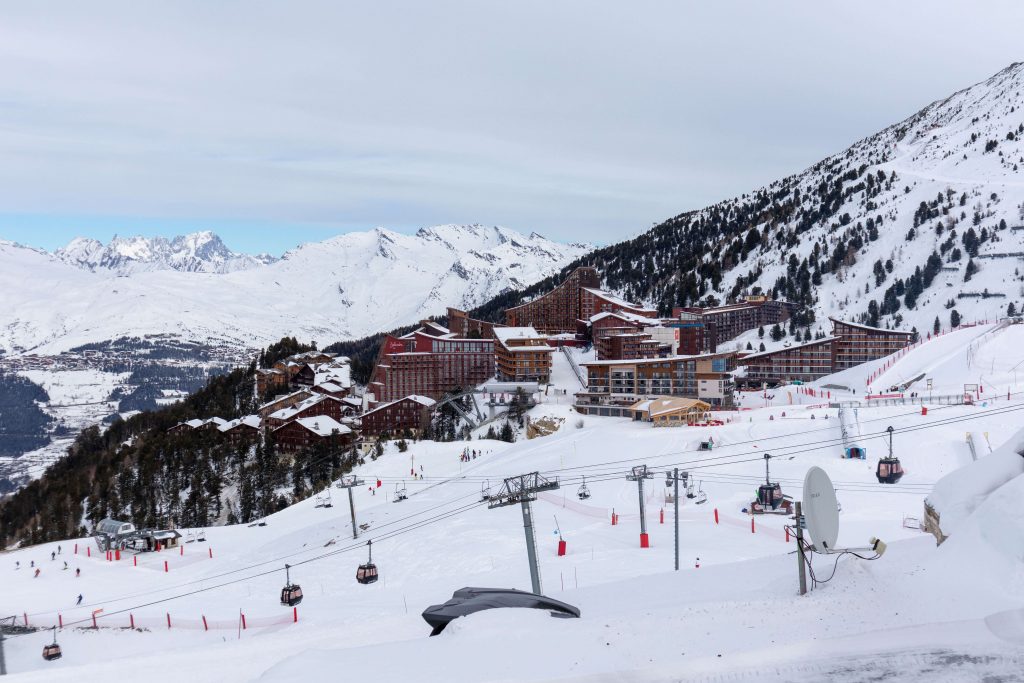 Why Go To Les Arcs?

Les Arcs is a section of the Paradiski area which is the 2nd largest connected ski area in the world and offers multiple ski slopes for all skill levels.
However there are a few other reasons why you should visit this popular French ski destination:

Les Arcs have gone green! Trying to reduce their carbon emissions and fill the area with enough sustainably powered public transport so people don’t bring cars.
By having great train connections throughout Europe with Amsterdam, Brussels, London, and many French cities being a direct train away, carbon emissions are lowered dramatically.
Travelling to a destination creates the most CO2 emissions on a holiday but train travel is the lowest by far compared to planes, cars, and boats.

The focus on the environment and sustainability doesn’t stop there. One of the most popular attractions in Les Arcs, Aiguille Rouge is 100% powered by solar power.
At 3226m it is the highest point in Les Arcs. It offers a panoramic footbridge and viewing platform offering amazing views over the Alps. After you’ve enjoyed the view you can ski down the 7km piste back to Villaroger at 1200m. 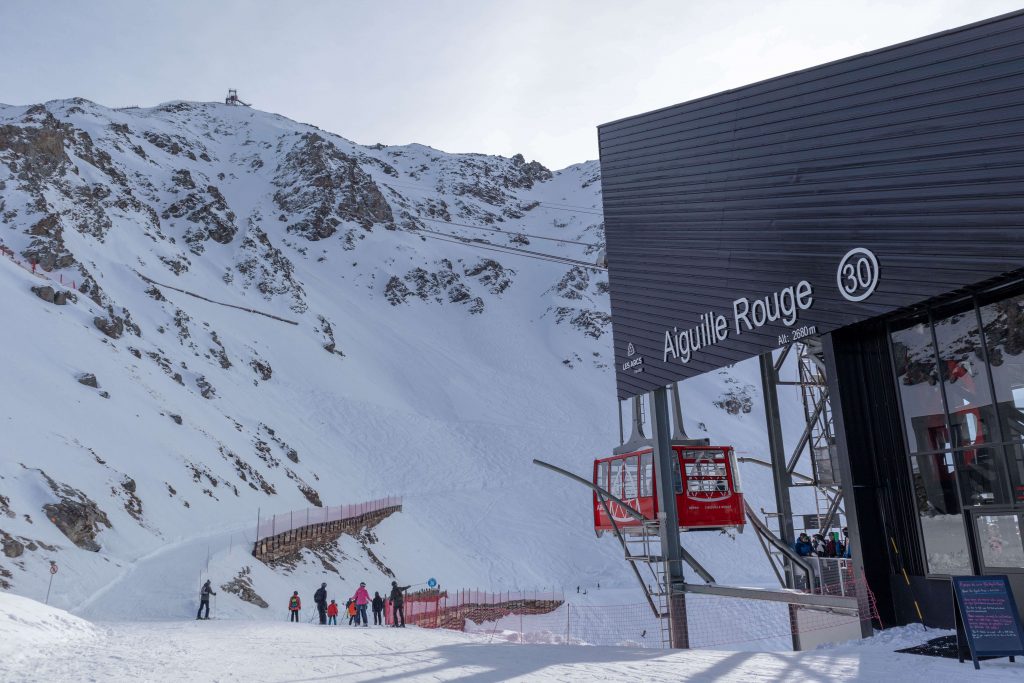 On top of that they are also trying to reduce the energy consumption by cutting the power and heating to the ski lifts during the night when they are not in use. And reducing the speed of the lifts during the peak hours to reduce energy. The vehicles used in the area to maintain the snow will also be switched to GTL fuel. Which is free from sulphurs, metals, and other toxic ingredients to free the air from pollutants.

Their commitment to sustainable tourism and preserving beautiful places like this for generations to come is one of the reasons I was so happy to go to Les Arcs.
I hope more popular tourist destinations take up the example of Les Arcs and make travel a more environmentally friendly pursuit.

How To Get To Les Arcs

On our trip we caught the Thalys  direct from Brussels and it took 6 hours and 31 minutes to get to Bourg St Maurice. The train originates in Amsterdam and stops at Chambéry, Albertville, Moutiers, Aime-la-Plagne, Landry, and Bourg-Saint-Maurice. It was super convenient because we could get on the train, stow our luggage and then relax with a book or catch up with some of our favourite shows to pass the time. The scenery as you head into the mountains is stunning! So be sure to keep looking out of the window from time to time. There is a small café on board where you can purchase drinks and basic food items throughout the journey. Tickets are approximately 120 euros per person. So extremely good value and there are standard, comfort or premium tickets available. If you book a premium ticket you’ll get a meal , magazines and lounge access.

Arcs 2000 was built in the 1960’s and named to symbolise the impending future of the new millennium. It sits at an altitude of approximately 2,100m and is the second newest of the four ski resorts. There is a shuttle bus that runs between Arc 2000 and Arc 1600 that takes about 20 minutes. Just above this ski resort is an igloo village with an ice bar and ice grotto for a unique night out.

The original ski resort in Les Arcs, it was built in the 1960s as a traffic free, purpose built ski resort. It is accessed by a funicular that runs from Bourg St Maurice. There is great accessibility into the other Arcs from Arc 1600 and a cable car which will take you to Les Deux Têtes.

Arc 1950 is the newest of the four, built in 2003 by the same people who developed Whistler in Canada. It is completely car free and therefore very compact with all the towns facilities just a few minutes’ walk away. It is connected to Arc 2000 by a gondola that runs until late at night. With its access to some of the more challenging ski runs, it is a great place to stay for more advanced skiers. 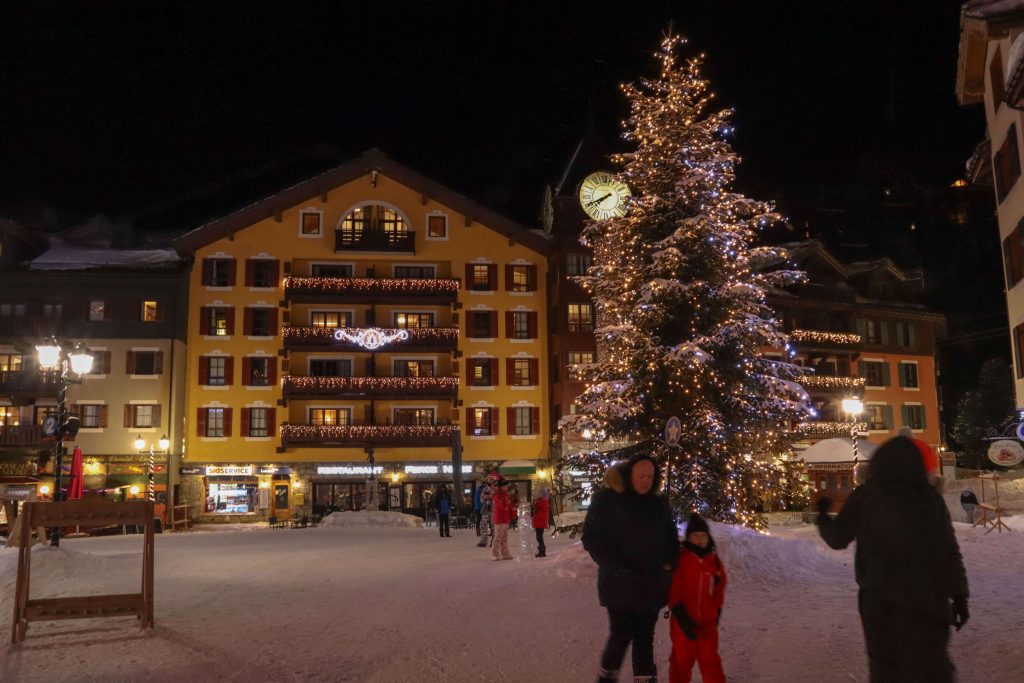 Arc 1800 is perfect for people who enjoy a little bit of nightlife along with their skiing. There are plenty of trendy bars and restaurants for a bit of après ski entertainment. The Red Hot Saloon is known for live music and there are even a few nightclubs. La Folie Douce opened in December 2019 and is perfect for people looking for the biggest party in Les Arcs. On top of the club there are also 3 restaurants with different themes and the whole complex is environmentally focused with only local produce used and the complex heated by the refrigeration units. Even though Arc 1800 is known as the lively resort of the four it is still really family friendly. A lot of the accommodation is apartment style with room for families with a toboggan run, a themed discovery piste, and obstacle course. 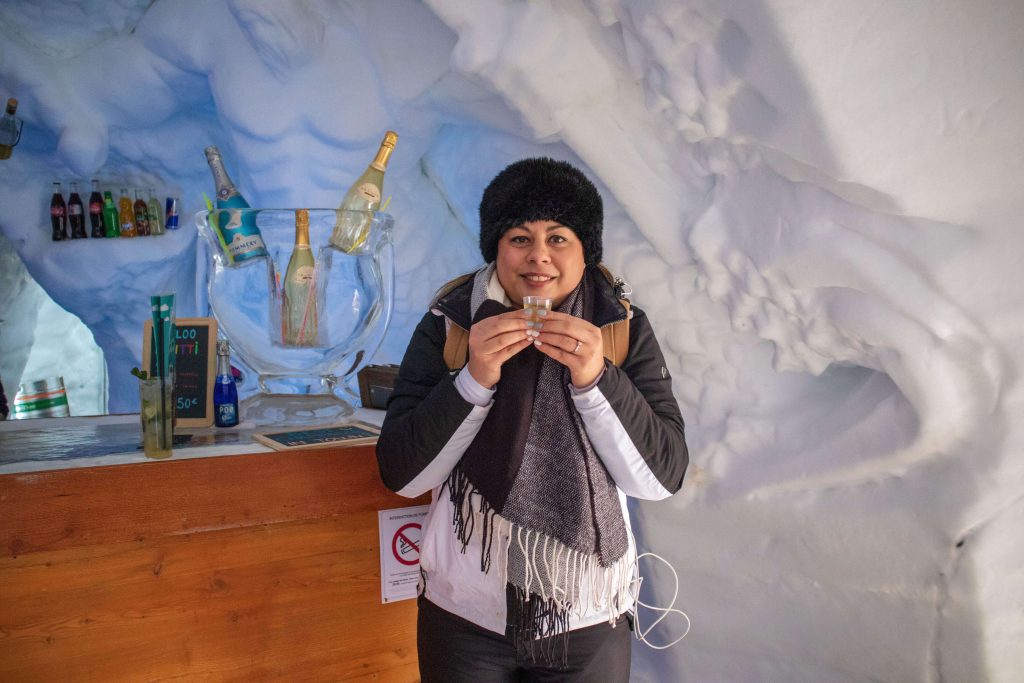 While not really part of Les Arcs, Bourg St Maurice gets a special mention. It is the hub of the Les Arcs and Paradiski area and offers transport links to many major cities in Europe. There is no skiing in Bourg St Maurice itself so you will have to take the funicular to Arc 1600 which takes only 7 mins. Bourg St Maurice is appealing as a bigger hub to stay in with more facilities, and access to a number of different ski resorts. Les Arcs, La Plagne, Val d’Isère, Tignes, La Rosière, and Sainte Foy Tarentaise are all a short shuttle bus away. 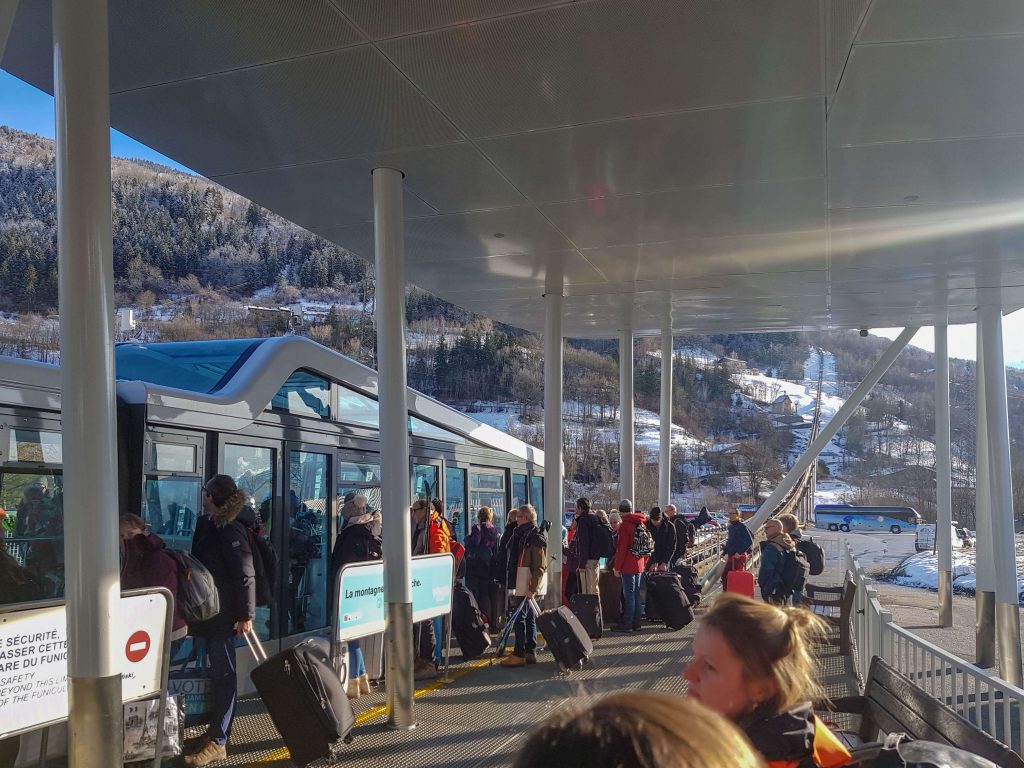 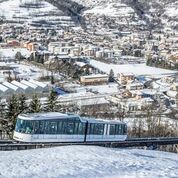 Thank you for having us Les Arcs, we learned a lot and we look forward to seeing what the future holds.