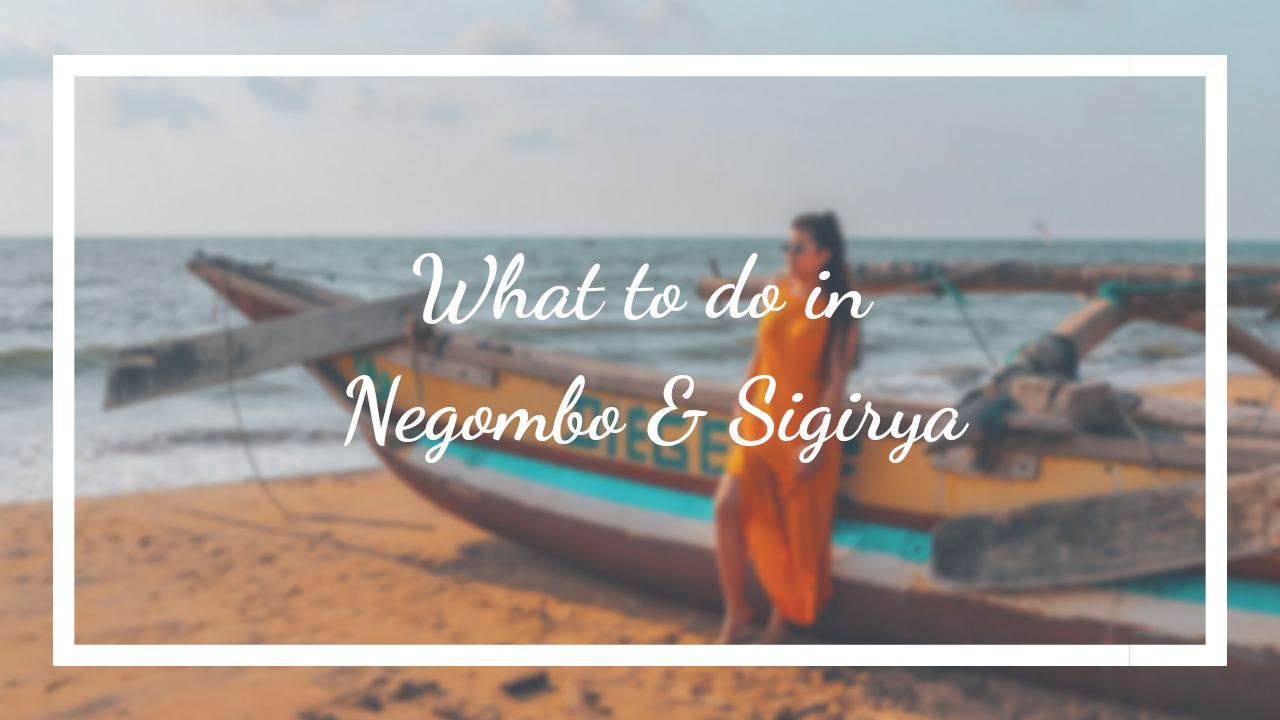 Yes, I can finally tell you about Sri Lanka!

Our first big trip of the year, Sri Lanka here we come!
Last year we doubted between Costa Rica and Sri Lanka, so this year we had to go to Sri Lanka of course.

We chose to do our own research based on other itinerary and blogs.
Due to the season it was best we did a ‘classic’ Sri Lanka and followed a triangle trail.

This is what we actually did, we changed the destination along the way.
We should have gone to Yala nationaal park but I kind of wanted the beach after a week into nature.
So let’s start our adventure.

First impressions, a cosy & small fishermen’s town at the beach.
1 ‘main’ road with different restaurants and some bars, but a calm beach area.
I thought it would be crowed but it was quiet & calm so loads of space to chill out.
But while the day progressed I’ve noticed some tension boiling up for some reason.

We celebrated our first night with some drinks, and we noticed that there were a lot of men.
And you could easily tell that women were targeted by them.
I normally don’t write stuff like this but sometimes you need to tell the ugly truth too right?

While walking back to our accommodation I almost got robbed by men on a scooter.
I left a detail out but while I’m writing this down I feel the need to tell you this anyway.
While on the beach there was a man who was ‘flashing’ himself to almost all women and even children.
It got so bad he was following women across the beach.
Let’s say I was happy we only stayed here for 1 day..

The next day we had our breakfast and headed to our next destination.
It was a long road, about 4hours.
Okay that doesn’t seem that long but the max speed was about 90km/h and 80% of the time you could only drive 70km/h.
But it was a nice route going inwards the country, it made us exited!
We stopped on the way to take a short break but also to see our first big Buddha statue.
The Buddha statue of Kurunegala should be the tallest granite Buddha statue in Sri Lanka.
We bought flowers as a token of respect and you needed to cover up.

Well, Sigirya had so much to offer that we decided to stay longer and we didn’t regret our decision!
But first we relaxed at our amazing accommodation, the paradise resort & spa 5*.
Like I said, there is so much to do out here, one of the main attractions we did was going through an ancient city by bicycle.

Polonnaruwa is one of the oldest king cities and the second largest ancient city of Sri Lanka.
If you have some time on your hands you could easily spend the whole day out here!
Going from one Building to another statue and have lunch while you’re at it.
Most people prefer to ride a bicycle instead of hiking because you’ll lose a lot of time.
We rented a bicycle near the main entrance which is located a bit further than the ‘park’ itself.

I don’t really remember how much the entrance fee was but it wasn’t a lot, plus if you like you could visit the museum that’s right behind the registrar.
With that ticket you could enter the ancient city Polonnaruwa.
We’ve spend half a day here, it was really fun and interesting but do watch out for the monkeys.
They’re not really afraid and tend to steal stuff.
So for your own good and the monkeys, it’s best to leave each other alone.

But Pidurangala is a bit of challenge and that makes it interesting.
You pay about 5 dollar and then you can go up.
Just when you think you’re about there , the tricky part comes.
You have to literally climb a small bit up, but once up you’ll have an amazing but seriously beautiful view.
Not only of the Lions rock but of the whole area.
We just sat there speechless and enjoyed what I thought was the most beautiful sunset I’ve ever saw. 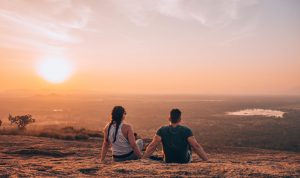 But when the sun is down make sure to hurry back down because there is not a lot of light.
It was kinda funny hiking back down.

It’s not really a hard hike but the last part you need to climb so think about that before you decide to go to this rock. 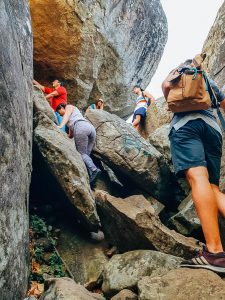 cooking class in a typical village.

I really wanted to try to learn the culture of Sri Lanka, so we (by that I mean me) decided to take a ‘cooking’ class.
This is a tour that you can take, it includes a short boat ride in a typical boat on a lake, which has a beautiful scenery, an explanation of how they used to live and a cooking demonstration.

The village doesn’t exist anymore but it does give you an idea on how it used to be.
After the all that cooking you can actually enjoy what you helped prepare in a typical hut.
We were lucky that we were only with 3 persons so it was completely personal and a lot of fun.
Going back we didn’t take the same route.
We had to go in a cart that has to be pulled by cows. 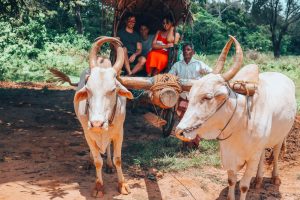 Don’t worry because the farmers need their cows so they do take care of them.
If I saw that the animals were abused or were looking unhealthy I would rather walk the whole way back.
We still had time on our hands before our next activity, so we headed back to our hotel to relax for a couple of hours. 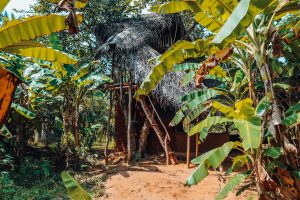 Our first national park was Minnerya and we did that in the late afternoon.
It was than that my favorite animals came out again to show their-self of.
And yes I could finally see them running free, a whole bunch of elephants coming out to have a drink.
You should visit a national park early in the morning or in the late afternoon.
During day time it’s just too hot for the animals.
First I was all exited because it’s my first time doing a ‘jeep safari’ in a national park, which was actually kind of cool.
But than when I took it all-in I kinda realized that this is really stressful for the animals.
You’ll know what I mean when you see the video.
It was like an ant’s nest around the pack of elephants.
You could tell that they were nervous.
But we didn’t stay that long at the same place because it was too stressful where I was,thankful for that. 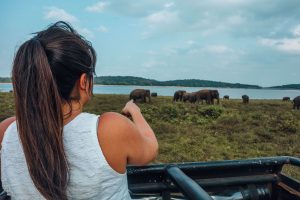 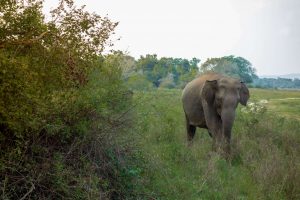 On the day we left amazing Sirigya we stopped at the ‘Dambulla Golden temple’.
This is place was so big, not only the temple itself but the whole area.
The Golden Temple is on the Unesco list since 1991.
When going inside the temple you needed to take of your shoes and cover up.
The Chambers have a lot of Buddha statues and paintings telling a story about how Mara (aka the devil) tried to seduce Buddha.
The complex has over 80 caves, 5 shrines and a lot of statues.
I don’t know why but we weren’t that impressed but it made us feel like we were in a fairytale story.
But you should visit it though, so you can compare them with other amazing temples. 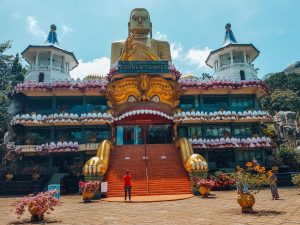 When in Sri Lanka you have to stop and explore Sigirya.
You can visit ancient cities and learn a thing or 2, I would recommend to stay a couple of days and do 2 activities and no worries, there is still plenty of time to rest.

Here are some tips that I learned on our first couple of days in Sri Lanka.
Never take a picture with your back facing Buddha, because this is a sign of disrespect.
Take something with you to cover up, you never know when u unexpectedly want to visit a temple.
Try taking a purse/ small bag and cross this over your head with the content in front of you when visiting busy area’s.
You are not allowed to take your drone everywhere, please check the signs.

One thought on “Travel:Must Do in Negombo & Sigirya”