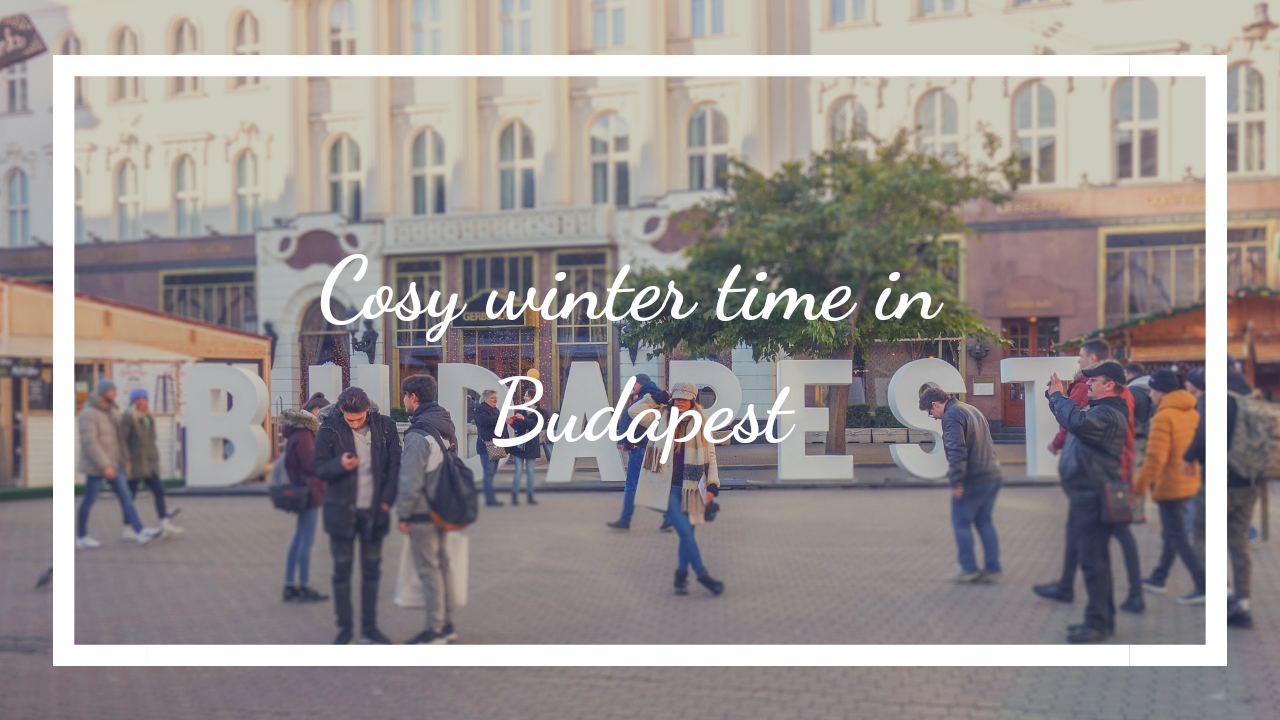 Last winter I saw so many posts about Budapest that I just got so curious that I had to see what the fuss was all about!
I convinced Maarten and even some friends to visit Budapest.
And with success, we did a 3 day trip to this amazing and charming city.

As we were with 4, we took a taxi to our hotel.
I wasn’t really sure how close we were to the centre.
But we were lucky and were only about 5min for the centre and really close to most things to go on foot!

We arrived in the early afternoon and I didn’t want to waste too much time.
So we checked in, freshened up and headed out again.
One of the first things that came along our way was an ice bar.
I’ve never been to 1 and we were with friends so that’s a good enough reason to have a drink, right?
Well, I’m happy we did that but it was not so special at all.
The drinks ‘menu’ included a entrance fee, a combo drink like a shot, a cocktail or a shot and a beer.
It’s actually a big fancy dressed up fridge and that’s it.
It was so cold that we didn’t stay that long so a bit a shame for our money.

Next thing we stumbled upon right in the heart of Budapest was that there was already a Christmas market and who doesn’t love that?

After a good night of rest we were determined to see as much as we could on foot.
And we did a pretty good job if I say so myself.
We walked the whole day and started at the Danube canal.
And we came across beautiful views along the canal which we wanted to explore later on.
We walked by ‘the Shoes of the Danube Bank’ which is a memorial of WO II and about a mile further you had the stunning and 3th largest Parliament of Europe.
It’s so huge and the view has gotten better when crossing the bridge. 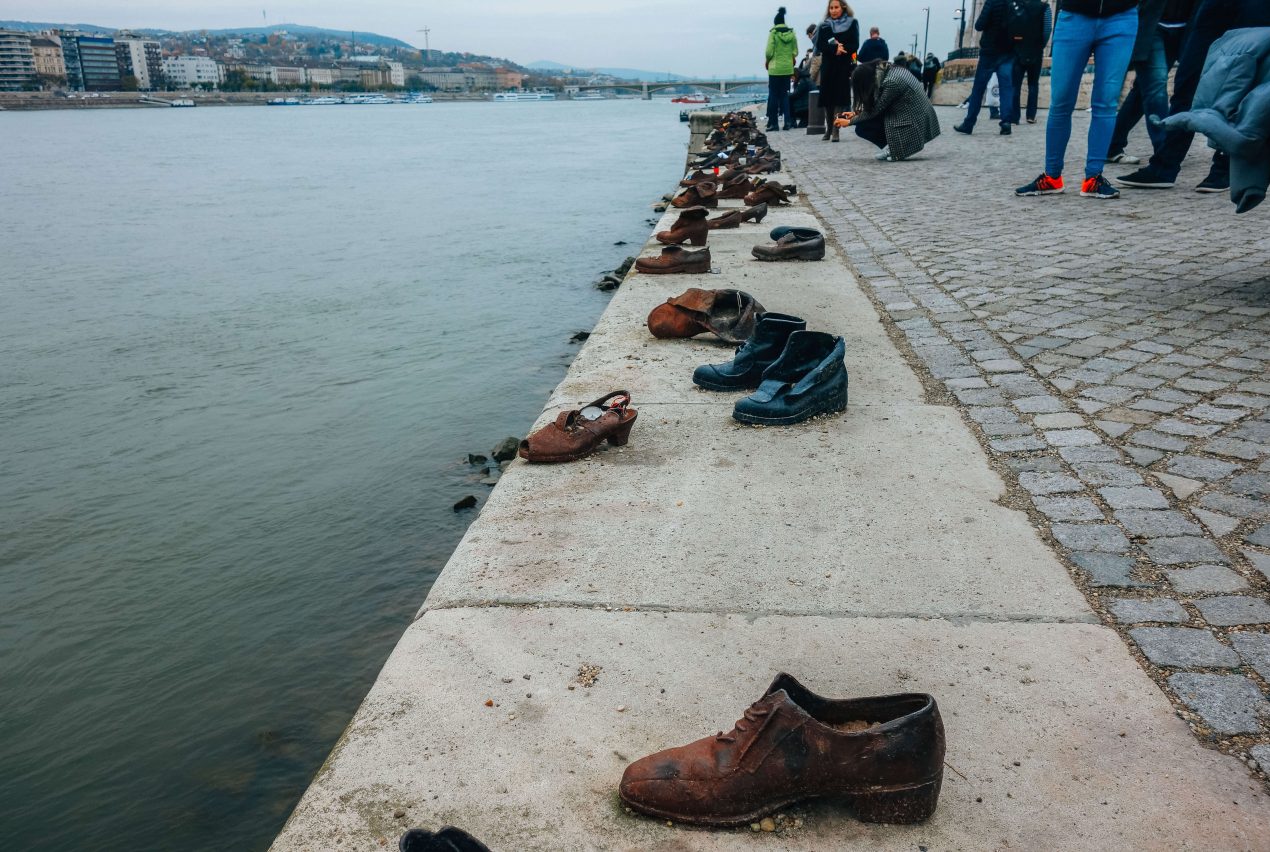 Across the bridge upon a hill you’ll see the Buda Castle and it’s there where you’ll find an amazing view of the Parliament through the arches, go see it at sunset I promise it’s the best (maybe for a proposal, LOL), around the Castle you can still see some historical parts of the 13th century.

On the way back we checked out the Jewish quarter and I visited my first Synagogue.
Again a beautiful setting and a lot of guides that love to explain how it works and the history of the Jewish quarter, you can just join a group if you like. 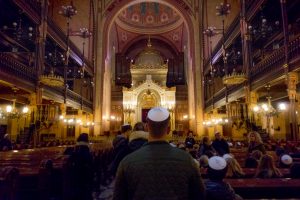 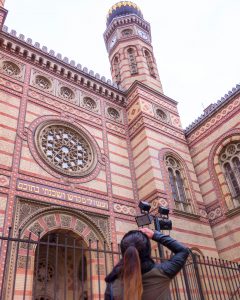 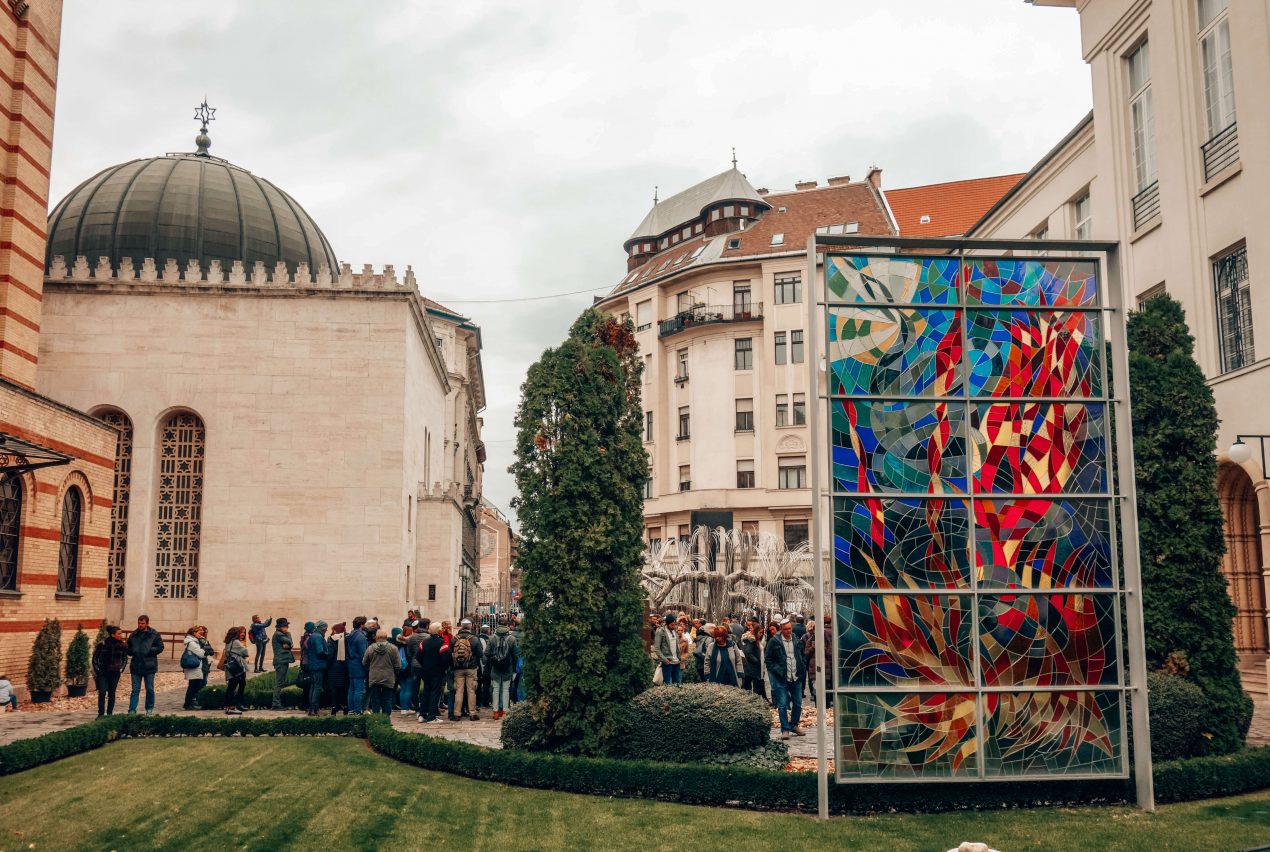 During winter time the sun sets early so once it was dark we headed back to freshen up for dinner.
I asked the tourist board of Budapest for some hotspots to eat and we ended up at the Jewish quarter where you can have dinner in an amazing setting, at restaurant Mazel tov you can have a great meal for a correct price ( I’m trying my best for food recommendations, bear with me).
It looks like you are in a courtyard and occasionally there is somebody who sings live. 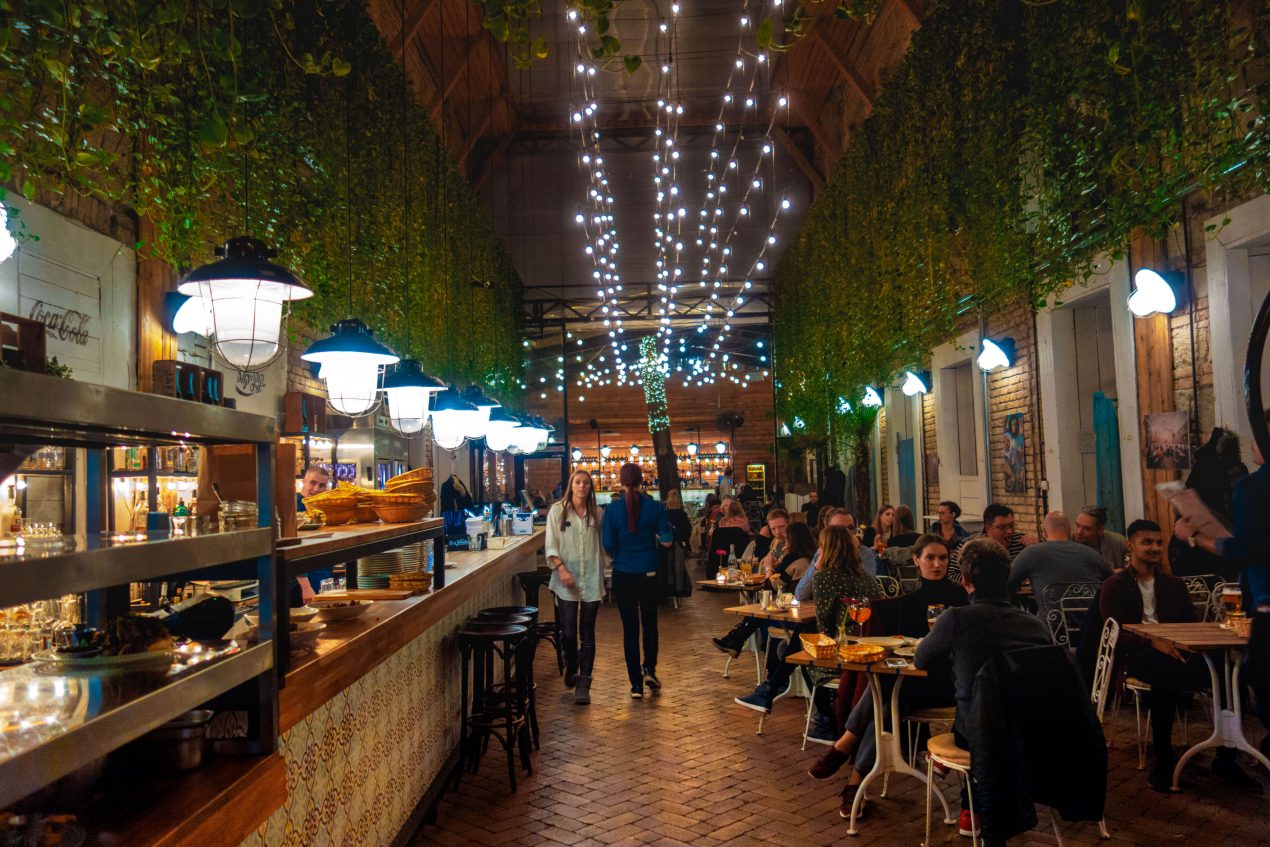 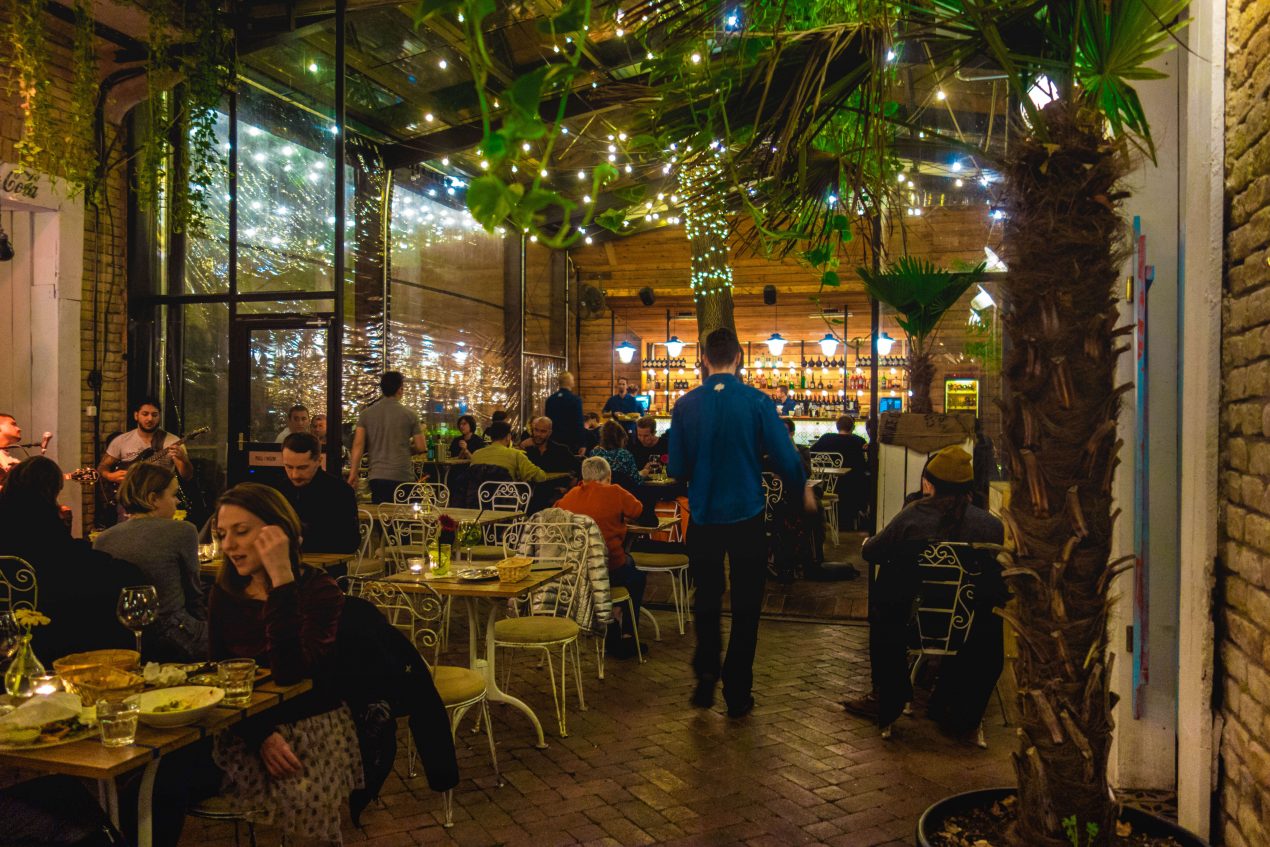 Trip advisor gives it a 4 out of 5 so fine by me :-).
tip* make reservations, apparently we were lucky because it was a week day.
ps: we tried, we enjoyed and we approved!

Budapest is known for several things and one of them are the spa’s, so the next day we went to (probably) the second largest bath, Gellert.
I initially wanted to go to Széchenyibad, One of the largest medical bath complexes in Europe.
But due circumstances we went to the next best thing.
Gellert Bath, is also a hotel with an amazing spa included.
I even think it’s the second largest in Budapest.
With the same medical water treatments that it’s known for started in the early 13th century.
We spend here half a day and it was so relaxing. 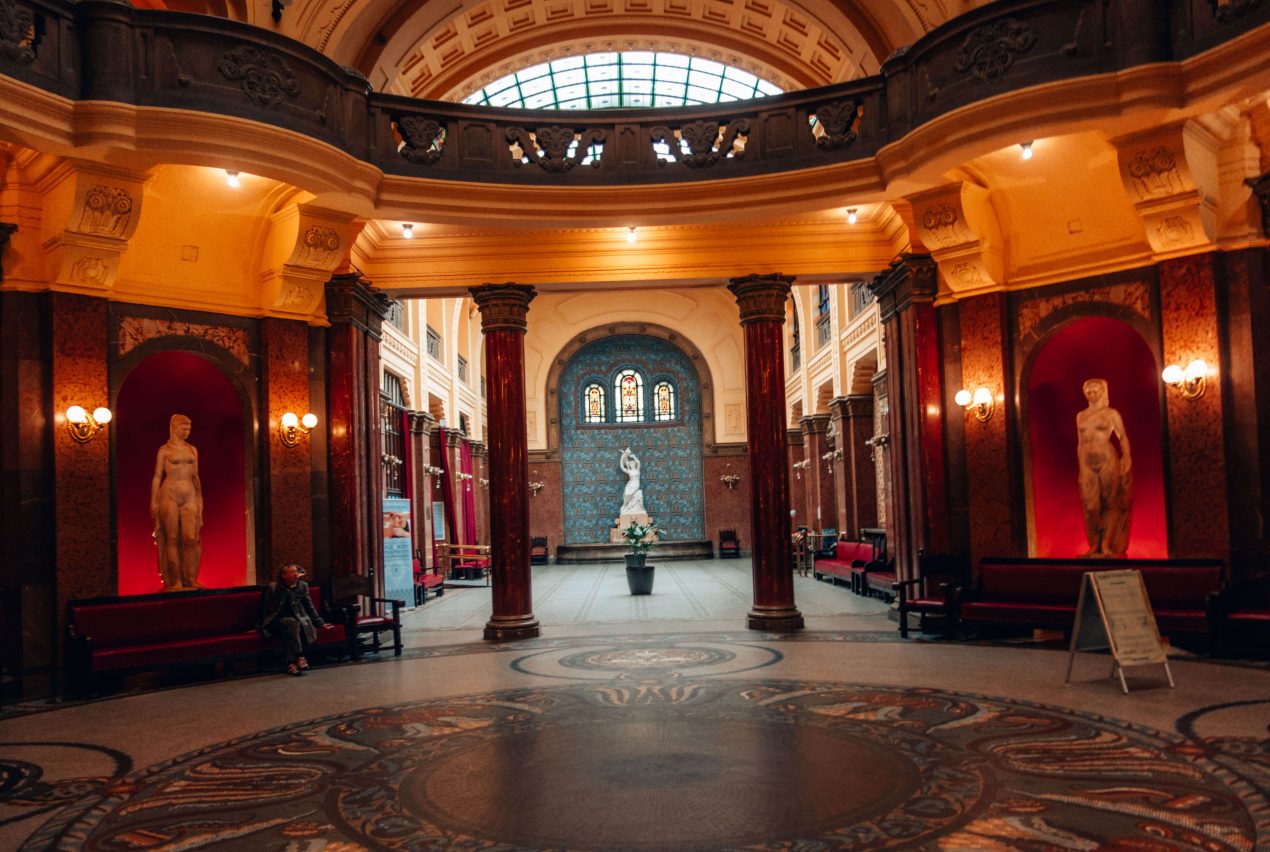 The inside has an ‘art nouveau’ style, decorated with mosaic and a glass roof.
In the big pool inside you have to wear a swim hat but, the other bath not.
You have to wear swim gear (bikini, swimsuit or shorts) and you can rent towels and slippers at the scene.
What I loved is that there was an outside pool and it was really nice and relaxing. 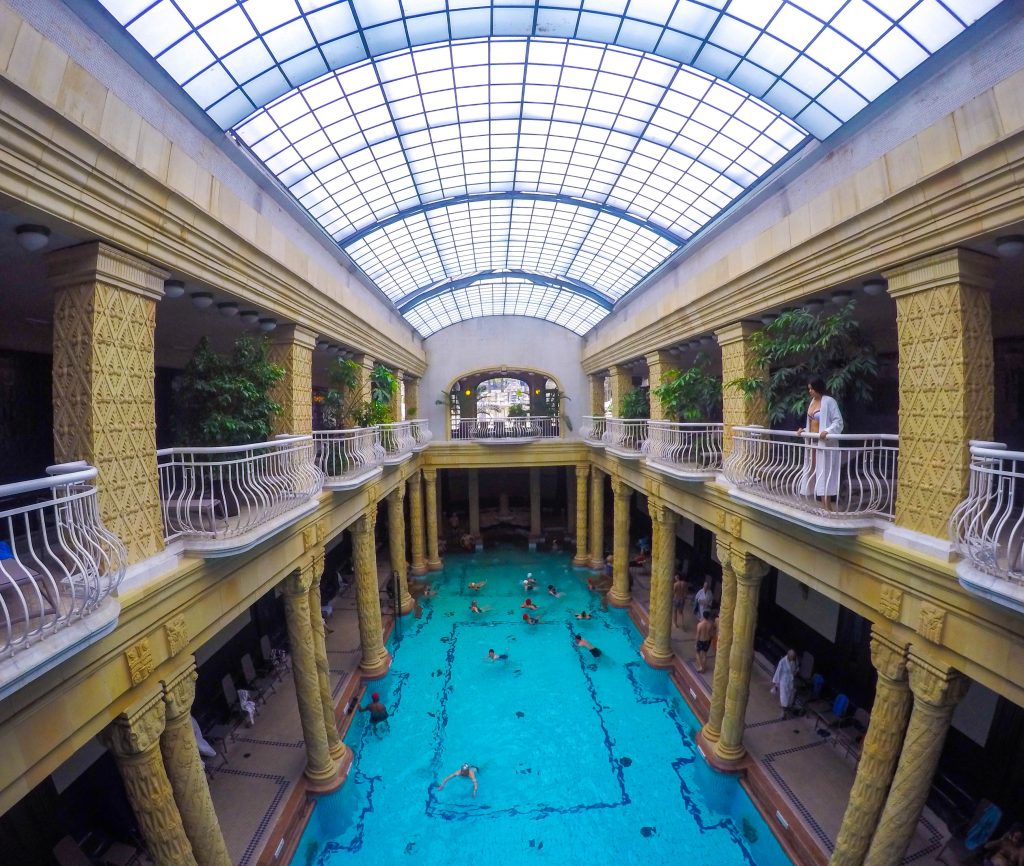 Budapest has several therminal baths and spa’s smaller than Széchenyibad or Gellert but those two are the most known (they even throw parties sometimes).
I read that it can be crowed but we didn’t experience that.
It was just good enough, not quiet but not too crowed either.

Across the Gellert spa, you’ll have the Geller hill (holy Gellert hill).
A nice walk up the hill which has amazing view stops and on top you’ll have a panoramic view of the whole city.
It’s also here where the Gellert citadel is.
As I come to think of it, we should have done the hill first and then the spa. LOL 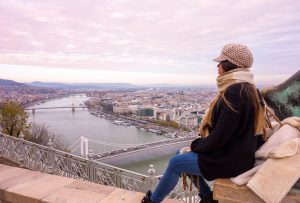 Hungary has also a nice wine collection, so what else on our last evening than to take a boat trip on the Danube and to do some wine tasting.
You can do several boat tours and they are all about 2,5 hours and the same road.
But do at least 1 boat tour in the evening, just for the cosines and the view! 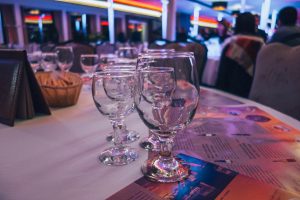 Budapest has been amazing!
We were lucky that there was a Christmas market, and if we could would’ve loved to try some more local food.
But overall food and drinks weren’t that expensive, but of course if you go into the main street it will always be a bit more pricey.

We went for 2days and a half, we had an early flight so we could make most of our trip.
1 and a half day exploring on foot (you can take a bus if you like) and half a day at the spa is ideal.
I was happy that I could share this moment with friends for a chance.
it shows a bit of a different perspective!